"From Hell to a Beautiful Life"
By Marcel Mensik

I GIVE IT FOR FREE IN CORONA & UKRAINE PROBLEMS
Here is a link to the book
https://sway.com/jlXd4PsAl5ZQXKrt 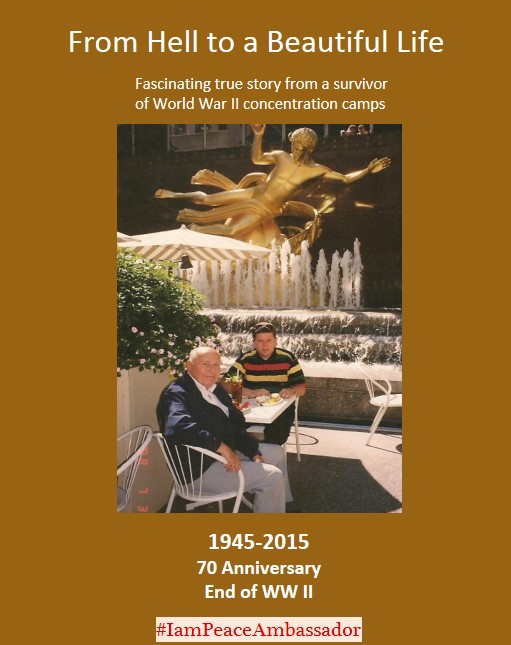 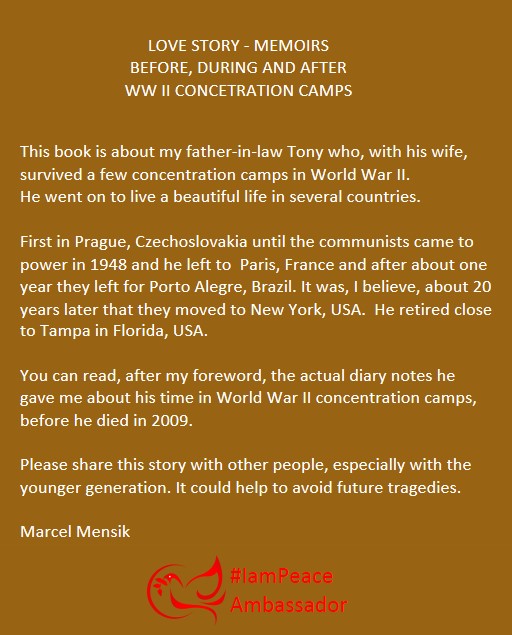 In Terezin we had a fairly good picture of how the war was going in Europe. Our hopes were increasing almost daily with the advances of the Allies in the West and East, but for us, whose lives were hanging on a thin thread, the going was slow. The situation of Auschwitz-Birkenau was unpredictable. When the front started to get nearer the gassing stopped. We heard that the SS blew up the gas chambers. Before Christmas, information were arriving that the Soviets were approaching our area. Rumors of all kinds started to circulate. We heard the wildest, very often, most contradictory, about what would happen once the Soviet army closes in. At this stage we knew already that Germany was loosing or lost the war. The question was what would become of us? It was known that prisoners in some camps were liquidated and the camps leveled by the retreating SS. Could it happen to us? Will the Germans simply move out and leave us? Will they kill us all? These were the thoughts on our minds. The only thing we could do is to talk about it and wait. Nothing else. We still went to the work site, but practically did not work. We stood there, shovels in our hands and moved around trying to beat the cold. Tension was in the air. The civilians did not longer come and the SS and Kapos were very nervous. We could see the road from our work site and, usually, there was not much traffic. But beginning January 1945 German military vehicles started to move West, only a few at first and every day the number was increasing. Heavy artillery pieces, trucks full with German soldiers, horse drawn carriages with wounded soldiers, even civilians. Finally we started to hear artillery fire coming closer and closer. We knew this is it! But the question was prevailing, what will happen to us? The crematoriums and gas chambers were partially blown up by the SS and rumors were mounting, good and bad. Rumors that the SS is moving out and leaving the camp to its fate. Others that before leaving the whole camp will be exploded and all prisoners shot, and so on. A few days later we did not go to work and stayed in the barracks. The next day a big commotion started. The SS came in to the barracks shouting "everybody out" were hurrying us out, as always, a total confusion. We knew that this is the end of Auschwitz but what should we do? I was debating with myself. Should I try to hide inside the barrack or go with the others? If they are going to explode the buildings there is no chance to survive. If they are going to search the camp I will be shot, if found. Leaving the camp, where will we go ? There was no clear answer. Again I had to depend on my luck and intuition. I do not remember what influenced my decision but I left with the others. No women were in Auschwitz 1.

A group of 2,000, in which I was, left the Auschwitz gate in the afternoon on Thursday January 18, 1945. Each got a bread ration of 150 grams. After marching the whole night we arrived at noon in an empty camp, Gleiwitz II, part of the Auschwitz complex. Next day we marched to nearby Gleiwitz I. We stayed one night and at noon walked to a railroad depot. With customary shouts and beatings we boarded open roofed freight cars, 150 prisoners to a car. There was no room sit. Eery silence in the cars, only the noise of the train and distant artillery fire. How distant we did not know. With the movement of the train and being tired we managed to squat pressing

against each other. Monday morning we arrived at Jaegernfeld and stopped at a side rail. Armed SS men were standing around the train in groups. When they saw a head looking over the edge of the car they started to shout, menacingly taking the rifles off the shoulders, ready to shoot. From time to time somebody dared to peek and reported what he saw. We did not always understand what he said It could have been polish, jiddish, hungarian or some other language. All Europe was in the car. No water, no food and one bucket as a toilet. One cannot speak of a mood in such a situation. Mental and even physical stupor sets in In such a situation there is nothing that you can think of. The body mechanism adjusts to the point of not thinking in order to switch the little energy available from the brain to the body where it is needed to stay alive. The train was standing for 36 hours but with got nor food or water. It started to move on Tuesday afternoon. At midnight it arrived at Ratibor, the SS opened the doors with the usual madness to get off faster. Supposedly partisans, the anti-German underground fighters, blew up the rails. On foot we continued into an empty block in the penitentiary of Ratibor. We got a kilo (2 lbs.) loaf of bread and a bowl of hot soup. There were faucets with water and we could stretch on the floor and sleep. What a relief. We left the penitentiary and started, again on foot on Wednesday, January 24, 1945 in the afternoon. We never knew where or for how long we will be marching. The burning question, in my mind, was how long will I be physically able to endure it. The will to survive drove me forward.

It was a long march in an East European windy winter on snow and sleet . Nobody had warm clothing and I was gratefully remembering Dr. Epstein's foresight. Many were walking in wooden clogs which was an inhumen and impossible task. The marching speed was not military but it was not a dragging pace. The Germans took care of that we marched west in German-Polish territory through villages and little towns. We had no food since Ratibor and replenished our need for water with snow. The number of marchers started to dwindle. When prisoners fell behind, the SS used their sticks to speed them up. Some started to be very tired and feeble and set or laid down. The Germans beat the fallen. Some got up and tried to walk again. Others could not. Those they simply shot him in the head and left the body where it was. The marching column did not stop. That was happening in the rear. Some stepped out of the column and started to walk or run towards the fields. A shot in the back stopped them. Nightfall comes early in winter and, in general, we arrived in populated areas at dark. The SS had things prearranged. At some stops at night we got water, a small bread ration, occasionally a hot tea of sorts. Wednesday night we slept in an air-raid shelter in Katscher, Thursday in Liebschuetz, in a movie house. The number of marchers was continuously decreasing. The dead were left alongside the road. The SS stopped the roll calls. The group was a horrible sight. Dirty, unshaven, heads bend down, limping skeletons. The marching pace became slower but still, we walked. The streets of the villages or towns were nearly deserted. The inhabitants walking in the streets glanced quickly at the column and turned their heads away. Old women often made the sign of the cross.